The Pamela Denoon Story: NFAW celebrates a Remarkable Story as told by her Husband Donald Denoon 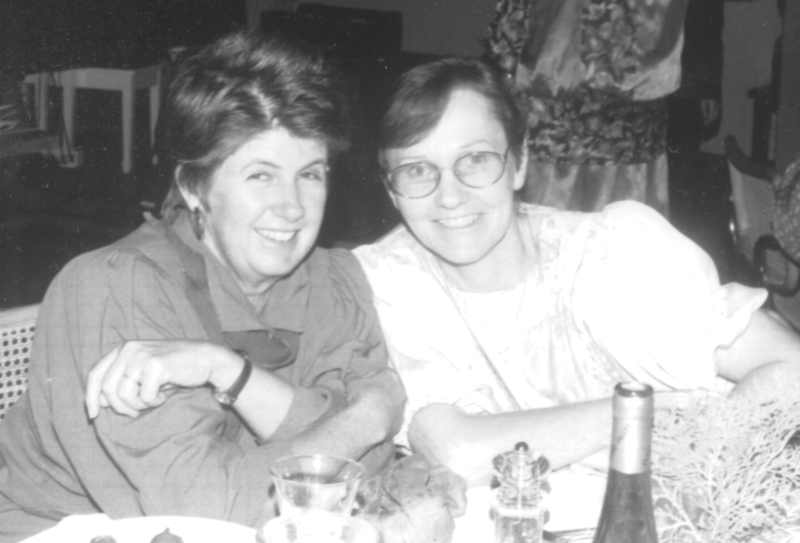 The Pamela Denoon Lecture was inaugurated in 1989 as a tribute to the memory of Pamela Denoon and as a reminder that the gains that have been made by women over the years have only been possible because of the enormous dedication of women like Pamela. Pamela Denoon worked tirelessly to promote equality for women and was the National Coordinator of Women’s Electoral Lobby from 1982-84. She actively lobbied for women’s rights in Canberra during the 1980s and her bequest helped establish the National Foundation for Australian Women and the Pamela Denoon Trust. The Lecture aims to inspire and motivate women to find out more about issues for women in Australia and encourage some of them to get involved in a local organisation that works to promote women’s rights and other major women’s issues.

When Pamela Tod was born into a farming family on the Darling Downs flood plain, her life seemed predictable. She attended the local schools, learned to cook (for the family, farm hands and shearers), drive vehicles in sticky black soil, enjoy the company of neighbouring farmers and learned to vote Country Party. Sons (like her brother Anthony) inherited farms and daughters attended boarding schools, studied if they wished, and spent a year abroad before marrying a grazier and repeating the cycle.

So Pamela set off for boarding school in Armidale, but her teachers recognised her need for speech therapy and she transferred to Wenona in Sydney. That brought her into the lively orbits of her Bavin aunts and cousins. As a child she had dreamed of being the first female Astronomer Royal: at Wenona she was drawn to the sciences, although that involved classes at a boys’ school. She particularly enjoyed geology and hoped to make it her career when she went on to the University of Queensland. Alas, the geologists would not admit women, as this would double the expense of toilets and showers on field work! After that setback her studies languished until UQ appointed a lecturer in the exciting new discipline of molecular biology.  When she graduated and – like many young women of her background – flew to England, she carried an introduction from her lecturer to the Medical Research Council lab in Cambridge, which was then Britain’s Nobel Prize factory.

While Pamela’s friends clustered in South Kensington, she relished working as a lab technician in Cambridge.  She spent weekends with relatives who had left Australia to build full lives and varied careers. In the 1960s Cambridge life revolved around undergraduates: graduate students and graduates working in the city made their own arrangements, often in The Graduate Society, an informal and lively club. (I swallowed a glass of Kanga Rouge at a wine-tasting event.) Pamela and I met at a dance: neither of us danced well, but we were not discouraged. A few months later we travelled to Istanbul. Some Toowoomba friends were intrigued that she was going to Turkey with a South African: others heard that she was off to South Africa with a Turk. We resolved to marry and move to London, where Pamela would work for another branch of the Medical Research Council and I would join the Foreign Office.

This conventional plan was immediately torpedoed by Ian Smith, the Prime Minister of Southern Rhodesia, who declared the colony independent of Britain. That decision provoked sanctions and fifteen years of war.  It also vetoed my appointment to the Foreign Office, because of my South African background. A month before the wedding, the groom was broke.

Careers beckoned in our homelands which we were keen to avoid! While Pamela analysed urine in the MRC and I was an improbable teacher of P.E, we looked around for a welcoming university. This search tested Pamela’s curiosity and her delight in novelty. We even pondered Newfoundland before settling on Makerere University in Uganda. Pamela knew even less about Uganda than I did but was not discouraged even by a military coup on the eve of our flight to Entebbe.

We enjoyed six glorious years in Makerere, including a year on exchange in Nigeria. In these early years of Independence, East Africans were full of hope and Africa drew liberal and radical supporters from across the world. Our three children were born in fine hospitals, and we spent holidays in the game parks on Uganda’s borders. Pamela taught and researched in the fine Medical School until our lives were again interrupted, this time by Idi Amin in 1971.

Universities were opening in the Pacific just as some closed in Africa, so our next move was to the University of Papua New Guinea in 1972 – another country full of promise on the eve of independence.  Pamela was losing touch with developments in molecular biology, so she turned to Sociology and Women’s Studies (UPNG was outstanding in both). This proved a decisive event which gave Pamela a clear focus and a new sense of purpose.  Given our settler colony backgrounds, we were acutely aware of racial discrimination; and living in England intensified our discomfort with class – but we had never thought of gender as an equivalent contested domain.  We were expatriates, so Pamela’s focus was personal rather than societal. She and her friends bought a textbook and embarked on Consciousness Raising.  They analysed their relations with partners, children, neighbours and the campus community. We concluded that our marriage was not based on patriarchy so much as inexperience and incoherence! We had grown up in awkward families so we had no useful models to work from, so it was exciting to explore what we could expect of each other and make adjustments.

During study leave in London Pamela read an MA at LSE. Back in Port Moresby she became a Social Planner in the National Planning Office. Over these years a lab technician had become a teacher, a medical researcher, a mother, an Arts student – and now a feminist and public servant.

It was soon time for another transformation. By 1981 our children were almost high school age, and I had an offer from ANU in Canberra. At first, Pamela worked as a research assistant in Urban Studies, then joined the Public Service: however, her great commitment was the Women’s Movement.  She worked with the Abortion Counselling Service, then threw her energy into the Women’s Electoral Lobby where her industry, modesty and diplomatic flair made her most effective. (At home, our youngest child happily took messages for the Women’s Electrical Lobby.) Pamela was part of WEL’s delegation to the Hawke-Keating Economic Summit, and lobbied tirelessly under the guidance of Susan Ryan, for the Sex Discrimination Act in 1984.

Two years later she was diagnosed with leukaemia. This might have arrested her evolution, but she preferred to focus her mind. Friends rallied from near and far; Canberra’s excellent Palliative Care nurses enabled her to stay at home. Louise came home from Hobart, Gordon from Kansas and Alex when he could from Sydney. With this support, she worked through an ambitious agenda. At school, an impatient music teacher told her she was tone deaf, and we had avoided the subject: now she learned that she had been misled, and we went to every available concert! She repaired fraught relations with her father and mother, strengthened the bond with her brother’s family, overcame her stutter (in case she had to talk to her maker), cemented relations with friends and the broader Women’s Movement. She gave close attention to the creation and endowment of the National Foundation for Australian Women and its purposes.

These were extraordinary times for her family and for her many friends, indelible in our memories. Pamela was fully aware that she was dying, but there were many small victories along that path. When Pamela died in September 1988 she had accomplished all the tasks she set herself: she had lived many lives and enjoyed several careers and found her vocation. She discovered and developed talents that she – and I – did not expect in the happy lab technician who danced rather badly at the Cambridge Graduate Society a generation earlier.

Story provided by the Family of Pamela Deenon November 2021.

Previous Story
A gender lens on the workforce: impacts of the COVID-19 pandemic in Australia
Next Story
Message from our Chair Jane Madden
The National Foundation for Australian Women (NFAW) would like to acknowledge and pay its respects to the Traditional Custodians of Country and recognise their connection throughout time to its lands, seas, skies and waters of which we live, work and benefit from today. NFAW would like to pay respect to the Elders, past and present, and extend that respect to any Aboriginal and Torres Strait Islander people visiting our page.
SearchPostsLogin
Gender Lens on the October 2022-23 Budget
Trail Blazers in Australian Film Light Up the Event in Canberra
How To Hit The Ground Running
Media Release: Gender Lens 2022 Election Budget Response
Budget fails to support Australian women – no structural reform in areas that affect women’s lives
Gender Lens on the Budget 2022